We are all beer geeks here. Let’s be honest.

We are very likely to struggle with decisions like whether to drink a Lawson’s Double Sunshine or a Heady Topper from the Alchemist. We don’t mind drinking beer out of pretty glasses, and we only buy golf packs of cheap domestic beer if we are under serious duress, and/or are channeling our inner hipster. 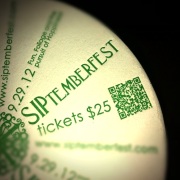 And that geekiness most likely spills over into other realms of our lives. For example, here at SIPtemberfest Headquarters, our insomniacs in the graphics department dialed in their techno-geek energy and added a QR code to our coasters!

Somewhat geeky explanation of  a QR code:  Not to be confused with the Quadratic residue code, QR stands for Quick Response. It’s a type of matrix barcode used similarly to your standard UPC code with fast readability but with a much larger storage capacity. The information encoded can store virtually any kind of data, not the least of which, for example, could be the URL for the ticket sales web page for SIPtemberfest. QR Codes can be scanned easily with one of many apps for smartphones, (not all apps are created equally though!) These will then take you directly to the information encoded in the QR code.

So now you can geek out about beer at Three Penny Taproom in Montpelier, Mad Taco in Waitsfield or Montpelier, or Hostel Tevere in Warren, and with the aid of your smartphone and a coaster,  buy your tickets to SIPtemberfest before ordering your next round! Cheers!

Get the Eventbrite Check-in App